The Secular Recovery Bill would have guaranteed nonreligious New Yorkers access to secular addiction treatment programs—instead of forcing them into religion-centered options like Alcoholics Anonymous.

This life-saving legislation had passed both the New York Senate and Assembly with bipartisan support and only needed Governor Hochul’s signature. Yet, last week, and without explanation, Governor Hochul harmed atheists, agnostics, and members of minority faiths with her veto.

One freelance reporter added, “When I was arrested for possession, they only offered a small list of rehabs I can go to, which had ties to RELIGIOUS institutions, and I never knew why. Now I know.”

Ryan Grim, a reporter at The Intercept, was even clearer: “This from Kathy Hochul will get New Yorkers killed.” 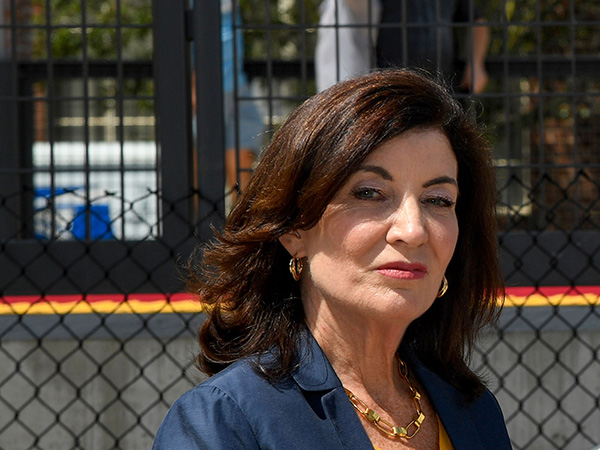 Governor Hochul failed New Yorkers, 40% of whom are nonreligious. And discrimination in accessing addiction recovery programs is widespread. Last month, the Equal Employment Opportunity Commission in Governor Hochul’s own state settled a lawsuit on behalf of a Buddhist pilot. He received $305,000 for being forced into a Christian-centered recovery program.

Hochul’s actions make no sense politically. In close elections this year, the polling is clear: nonreligious voters pushed many Democrats, including Hochul, over the top.

With Governor Hochul’s position out in the open, we are exploring all options, including litigation.

We’re committed to passing Secular Recovery Bills in more states next year—and getting this bill across the finish line in New York. No one should be forced into a religious program that won’t work for them.

We’re committed to passing Secular Recovery Bills in more states next year—and getting this bill across the finish line in New York. No one should be forced into a religious program that won’t work for them.

As we close out the year, make a tax-deductible donation today so that every single option is on the table. Whether it’s $25, $50, or even $500, your support ensures that progress happens.

PS: We’re not going to let Governor Hochul’s decision slow us down. We’re going to keep fighting for secular recovery options—and other bills that protect our rights and improve our lives—in all 50 states. Stand with us for the new year with a tax-deductible gift today.