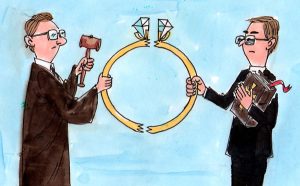 As reported on December 2, 2014 in the Religious News Service (RNS): Should clergy divorce themselves from civil marriage? In a survey of 2,000 American adults, the Nashville-based Christian research company (LifeWay Research) found that 36 percent of them said that clergy should no longer be involved in the stateʼs licensing of marriage.

LifeWay also conducted a parallel survey of 1,000 Protestant pastors. It found that one in four favored separating religious marriage rites from the need for their signature on a government-issued marriage license that make the ceremony legally binding. This is how itʼs done already in many foreign countries, but not — so far — in the United States. Ed Stetzer, executive director of LifeWay Research, called it noteworthy that so many pastors are willing “to stop saying ʻBy the power vested in me by the state … ʼ during a church wedding ceremony.”

In July, the traditionalist magazine First Things launched a campaign for clergy to pledge to stop signing marriage certificates. So far, more than 330 pastors have signed the pledge. Philadelphia Archbishop Charles Chaput told the nationʼs Catholic bishops last month that Catholic priests might consider opting out of certifying civil marriages as a sign of “principled resistance” to growing legal recognition of same-sex marriage.

The basis for these actions is found in Obergefell v. Hodges, June 26, 2015, a landmark United States
Supreme Court case in which the Court held that the recognition and provision of same-sex marriage is a fundamental right guaranteed by the Fourteenth Amendment to the United States Constitution. Obergefell requires all states to issue a license to marry between all people of the same sex and it requires all states to recognize same-sex marriages legally performed in other jurisdictions.

Justice Roberts specifically questioned the tax status of religious organizations that wish to discriminate on the basis of sexual orientation. This was a question that came up during oral arguments for Obergefell. Indeed, the Solicitor General candidly acknowledged that the tax exemptions of some religious institutions would be in question if they opposed same-sex marriage.

Alito cited a 1983 case involving the evangelical Christian Bob Jones University, which had refused to allow interracial dating on its campus. The Court ruled that the school could not be tax-exempt if it maintained its ban; the university accepted the consequences, not changing its policy until 2000.

Divorcing clergy from civil marriages would be a solution to this problem and help maintain the Separation of Church and State.