DESTROYING SEPARATION OF CHURCH AND STATE BEGINS AT HOME 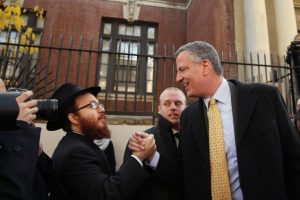 As a condition of their participation, the community’s Yeshivas (schools for Orthodox students) have demanded the right to hold formal half-hour prayer periods after lunch for all students. They have already won the right to discriminate in the hiring of teachers with a believers-only policy, and to use religious books as texts for non-religious subjects, such as math. Their ultimate goal is to receive public funding from the pre-K program with no supervision or restriction, enabling them to devise their own curriculum, rather than be guided by the city’s.

By extending these concessions, we have not only permitted a clear breach of the Separation of Church and State, but have created opportunities for the city’s many other religious groups to follow suit in their own schools: Muslims (who pray five times a day), Catholics, and even other less well-established communities on the fringes of society—all eager to receive the bounty of public funding without having to comply with the basics that govern public school education. Having given an inch, the city will be besieged by those who are planning to hijack a mile: for single-gender schools, separate busing for boys and girls, non-English curricula, Special Ed, Personal Lifestyle, and Beliefs. Drawing a line between admirable goals and the blackmail that can be required to reach them will become impossible.

Yeshivas traditionally teach most of their courses in Yiddish, and others in Hebrew. They favor Jewish history over American history and culture. So non- English texts must be used by students, leaving them (despite their American citizenship) deficient in the language skills and knowledge needed for higher education and participation in our secular society. I once asked a Hasidic rabbi how geometry could be taught using the Talmud. I cannot forget his response: “What is geometry?”

There are no precedents in the city for the current pre-K initiative, nor as yet to any of the problems that its inclusion in the private religious school sector will generate. But certainly—given the eye-popping budget items it will underwrite—being able to trust both the city officials who will disburse the funds and the school administrators who will receive (and spend) them, is an essential concern, especially as the program begins rolling out through the city. So it is critical that oversight be in place.

Without pointing a finger at anyone before the fact, I have been following what is happening in a similar situation in East Ramapo, NY, and urge that it be considered as a cautionary tale for what could easily happen right here at home, where many of the same elements are waiting in the wings to converge.

East Ramapo’s public school population is primarily Hispanic (29%) and African-America (57%), but the primarily Orthodox Jewish men who have come to dominate the school board support low taxes (even though they have many children and send them to private religious schools). As a result, the board has been quick to cut programs and personnel in the school district, and to divert the money saved by these “economies” into local Orthodox schools. Along with senior citizens (who have no children), they have formed an informal voting bloc that keeps taxes down.

The board has mismanaged and wildly overspent its budget. Heightened tensions have boiled over into shouting matches and confrontations at meetings with town and state officials, who are insisting that the district budget be balanced. No easy solution is in sight, and it’s become an ugly story that newspapers, magazines, and YouTube can’t get enough of. You can Google the storm of print reportage, and view many of the videos online. So don’t relax just because East Ramapo is out of town; many of its Orthodox Jews have relocated there from the very same Brooklyn Hasidic community now strong-arming the mayor for pre-K favors. Like I said, a cautionary tale…

While the struggle to organize New York’s pre-K program continues and will take time to settle down so that all New York’s children can benefit (without all New Yorkers having to pay for those who will join in while destroying a basic American principle), there are other more troubling long-term goals lurking behind the pre-K issues:

1) Income tax deductions for all school expenses (tuition, books, etc.) for non-public school students. This initiative is being spearheaded by Cardinal Dolan, who is seeking Governor Cuomo’s endorsement.

2) Total governmental financial support (from the city, state and Federal government) with no restrictions or evaluation of religious schools (Yeshivas and Parochial schools). According to the Forward, The Orthodox Union (OU) has launched a “multi-million-dollar advocacy campaign” to advance their agenda. They have retained an A-list political strategist (whose name they will not make public) and have added ten full-time staffers.

Although the basic goal of the universal pre-K program is to provide a free and equal early education for every New York City child, by including religious schools in the mix, harsh reality works against free-and-equal. Children who attend Religious schools do not mix with their peers– rather, they are isolated from them and develop a sense of elitism.

This is not only another aspect of the separation of Church and State, but also directly contrary to the mayor’s basic goal. And it is extremely unlikely that secular parents will want to send their children to a Yeshiva or a Manarah (Muslim school), where classes are segregated by sex, and religious dress is required, to say nothing (in the case of Yeshivas) where Yiddish is the language of instruction.

Finally, since we live in a time where the bottom line rules, extending the pre-K program to religious schools is no exception to it. The investment in the pre-K program by the city, state and Federal government is enormous–far greater than anything required by simply adding teachers and classes for an additional school year.

For instance: because of the half-hour daily prayer periods required by Yeshivas, four-year-olds would have too long a school day. The solution (so far) has been to keep the school day at its current length, and add a sixth day to provide the necessary time for classes and prayer. In some cases, it would be necessary to require schools to be open on Christmas and Easter to provide classroom time. Of course the taxpayers would have to shoulder this extra burden of teachers, security, and utilities, and it would be punitive.

Even Rabbi David Zeibel, executive director of Aguduth (an ultra-Orthodox umbrella organization), predicted that these concessions, despite their cost, would lead at best to a very modest increase in membership by the Hasidic community in the pre-K program.

So the bottom line here is that the escalating concessions both seriously undermine the Wall of Separation of Church and State that is the basis of our democracy—and also add an insupportable burden to our already cash-strapped city—without even providing an educational return that would justify the costs involved. Since an educated electorate is the basis of a working democracy, we must find a better solution to the problem. There are those who think Charter Schools may do the job. I disagree, and will explain why in these pages in the near future.