Recently we Americans have been forced to confront real questions arising from our use of torture. Do we rationalize its use in certain circumstances but not others? Even ignoring the question of whether it actually works, does the end ever really justify the means? Is torture acceptable when our government is responsible but unacceptable when conducted by some foreign entity? Do we outright deny the validity of the Geneva Conventions or do we merely deny that what we do is technically torture? Do we view it as a necessary evil to protect our lives and freedoms?

Or do we condemn torture categorically regardless of any rationale? Do we support the prosecution of those who engage in torture regardless of their position in our government or even within our own political party?

It turns out that our views on religion are excellent indicators of how we are likely to answer these important questions. 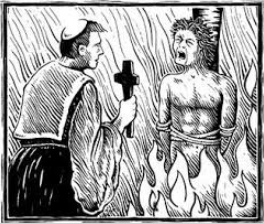 Religion has long walked hand in hand with violence, war and torture, neither leading, neither following, but each symbiotically sustaining the other. Most of us are quick to acknowledge an unholy relationship between radical Islam and a culture of war and torture. But we are less likely to acknowledge that a majority of Christians are no less willing to embrace violence and even torture. The marriage of guns and bible has been a long and horrific union, but the Christian embrace of torture goes back to the Inquisitions and far beyond that to the Old Testament.

This is not merely a biased, anecdotal assessment based on long-abandoned barbarisms of the distant past, or even cultural memory of racial atrocities perpetrated by Christian zealots during the last century. Religious rationalizations of, and even engagement in, violence and torture is still alive and well today. Certainly, many Christians and Muslims alike denounce violence and torture in word and deed, but amongst Christians at least, they are a statistical minority.

The Christian tendency to embrace the inhumanity of man towards man is not based upon old, biased, anecdotal perceptions that can be dismissed and minimized. It is exposed and quantified by the findings of current and credible polling studies. According to a
recent Pew survey, people who attend church at least once a week are more likely to say torture is often or sometimes justifiable. Christians in fact are always measurably ahead of the rest of the country when it comes to waging war or condoning brutality and violence. Indeed, Evangelicals supported President Bush and his fabricated Iraq war more strongly than any other demographic.

And the Pew poll is hardly the only one confirming that this Christian embrace of violence extends to torture. A recent Washington Post/ABC News poll found that while 59% of Americans believe that the CIA treatment of suspected terrorists while held in detention was justified, the level of approval was much higher among Christians. The poll found that while 72% of nonreligious people believe that the CIA treatment of detainees amounted to torture, only 39% of evangelicals agree with that assessment.

When the same poll asked whether the CIA “treatment” was justified, approval for this activity (whether or not you call it torture) was dramatically higher amongst all religious demographics than non-religious ones. Likewise, disapproval was reversed as well, as can be seen clearly in the following summary of those results.

As is evident in these results, non-religious Americans are far more likely to view this treatment as torture and likewise to disapprove of its use than any Christian demographic. These findings directly dispute the raison d’être of religion, which is the claim that it imparts superior moral and ethical principles and that a lack of a religious basis results in less developed moral reasoning.

We Atheists and other non-religious groups clearly hold the moral high-ground on torture as well as on a wide range of critical moral and ethical issues. But we need to do far better in translating our deeply held humanist convictions into tangible actions that make the world a more humane place in which to live, starting with abolishing torture in our own country.

We need to not only hold the high ground here, but to build a great beacon of light upon it and shine it upon the world. We need to speak out and even march at every opportunity against violence, war and torture and draw clear and unmistakable lines between where we stand on these issues and the culture of violence and torture that many in the religious community would like to perpetuate and even expand.